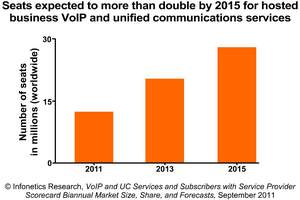 We’ve all heard the reports that business VoIP is projected to grow massively over the next couple of years. We’ve all heard predictions that the VoIP market is going to be extremely exciting throughout the rest of this decade. We’ve all heard that VoIP is the future of telephony, for both enterprise markets and the private sphere. But most of the predictions are extremely vague. Thankfully we’re starting to see some new reports come in that begin to align these predictions with some real numbers, and the VoIP-dominated future they predict appears to exceed what most of us anticipated.

Tens of Billions in Growth

The most recent projections for the growth of the VoIP market comes from the Point Topic firm, which estimates the global business VoIP market will expand exponentially into a $40 billion industry by 2015. That’s right: this firm’s predictions argue that the market will grow by tens of billions of dollars within the next 3 years alone.

To understand just how significant these numbers are it’s important to take a step back and take a look at the current size of the global market.

One set of recent data on the size of the global VoIP market comes from research firm International Data Corporation, which released a detailed breakdown of the market’s 2011 successes. This report states that the market racked up about $3.5 billion last year, when all was said and done.

$3.5 billion is a far, far cry from the $40 billion Point Topic projects for 2015, which begs the question… will the VoIP market really grow in size by over 10x last year’s volume over the course of the next 3-4 years? Is such growth even possible, or is Point Topic simply pulling grandiose numbers out of thin air?

Not As Crazy As it Sounds

While it’s natural to hear a projection like this and to write it off as ridiculous and hyperbolic, it actually isn’t that hard to see the VoIP market exploding in size at this rate for a couple of big reasons:

These two conclusions seem pretty obvious, but are they the reasons why Point Topic has weighed in with such a favorable growth analysis of the global VoIP market? Or does Point Topic have other, perhaps less ambiguous, reasons for feeling the way it does about VoIP’s glowing future?

In their report outlining the projected growth of VoIP, Point Topic estimated that the telephony technology was going to explode to a 40 billion dollar industry as soon as the year 2015. Up well over ten times the annual revenue posted by the global VoIP market last year. This is a big claim, and one Point Topic backs up with a few salient points that go beyond simply estimating what might happen to the VoIP market when it penetrates individual and personal communication habits.

First up, Point Topic does acknowledge that the growth of VoIP haven’t been a straight line. The company’s report describes VoIP’s growth as “bumpy” while also noting the technology “shows signs of acceleration.” What are these signs, exactly? What indicates to Point Topic that VoIP might be headed for a much, much larger future?

Basically Point Topic identifies VoIP as what’s known as a substitution commodity, or a product or service that customers buy into to replace an existing product or service that serves a similar need. In other words VoIP is a substitution commodity because consumers who opt into the service will use it to replace their land lines.

You’d think that consumers would buy into a substitution commodity as soon as they realize that commodity is better than their current solution, but that line of thinking is actually inaccurate, largely because “better” is a relative concept.

So if the fact VoIP is better than traditional telephony technologies (and it is in a universally recognized, objective way) and people haven’t yet adopted it en masse yet, then what will it take to see the true VoIP revolution we’ve all been talking about, the true VoIP revolution Point Topic argues will result in 40 billion dollars in annual revenue?

Price. As Point Topic notes, people tend to adopt substitution commodities en masse when that commodity’s price drops down. With these very specific sorts of commodities consumers tend to spend a long tend vaguely aware of the commodity, consumers spend a long time slowly learning more and more about the commodity and its benefits, but they fail to actually make the switch to the commodity until it is “appropriately priced.” Only when the price of the new commodity drops low enough will consumers make the choice to switch from a product or service they known works to a product or service they think will be better. A low price, it seems, is the last straw, the last little push consumers need to make a switch they know is beneficial, but which is difficult for no other reason than hardwired habit.

Bottom line- if a consumer knows VoIP is superior to their current telephony option they may not take the risk of switching until VoIP becomes cheap enough to finally justify the changeover. And according to Point Topic, VoIP is about to reach a price point consumers won’t be able to resist.