Was HP a Big IP PBX Player In the First Place?

HP inherited their IP PBX base when they acquired 3Com. 3Com was known for its networking and telecom equipment and, for a period of time, was one of the major players in the IP PBX market. 3Com was not the original developer of its IP PBX either. In 1999 the company picked up Boston based NBX. The company never reached the status of the IP PBX market’s biggest players and didn’t benefit from the name-brand recognition of an infrastructure provider like Cisco. The product was not scalable enough to make it into large enterprise due to its limited scalability. Yet 3Com was still really important due to the fact it was one of the first companies to spearhead the creation and development of the modern SIP-based digital telephony. In fact, back in the day 3Com offered one of the best PBX platforms around and is largely responsible for convincing early adopters that digital telephony was a legitimate enterprise.

Despite the quality of its product 3Com ran into some serious financial problems resulting from its inability to adapt to rapidly changing network technology market. But as he auctioned away most of his company 3Com’s president retained control over its IP PBX division and software, which continued to put out one of the best products on the market- an IP PBX called VCX that arguably bested the better known, but less well developed, products on offer from tech heavy hitters looking to get in on the emerging action.

3Com never quite found the financial foothold they needed and ended up selling everything to HP, including their IP PBX products. This purchases’ benefit to HP was not easily apparent. At the time HP’s core focus was far from IP telephony even though 3Com’s IP PBX products gave HP entry into the market and another front to engage its biggest competitor, Cisco.

But even if HP had recognised the value of the VCX, the acquisition came too late. Cisco quickly poured resources into their voice division and soon grabbed a commanding share of the enterprise-level market. HP wasn’t able and did not even attempt to catch up, ending up killing its IP PBX business, announcing an end-of-sales by December 2012 and five more years of support to its existing clients before getting out of the business entirely.

At least, that’s the popular narrative being spun right now. The truth is just a little more complicated and illuminates some important trends in the world of enterprise-level digital telephony.

Why Did HP Really Give Up on IP PBX?

Here’s the thing, HP didn’t buy 3Com for its IP PBX division. HP has been pretty open about the fact it wasn’t interested in seriously pursuing IP PBX or even VoIP services from the beginning. It just didn’t factor into HP’s long-term plans in any significant way.

Before HP purchased 3Com they didn’t have any entry into the IP PBX market and that was an intentional decision. By the time HP made its purchase 3Com’s IP PBX division had already found itself severely beaten down by Cisco and the industry’s other bruisers. If HP wanted to be a serious contender in the digital telephony market it would have had to construct a new channel for selling digital telephony, practically from scratch, to funnel 3Com’s IP PBX products through.

That sort of massive investment would have been a pretty big gamble for HP, but most analysts believed the company could have carved out its own profitable corner in the growing market.

Instead, HP chose to bow out without throwing a single punch. Sad.

What’s most surprising about this whole story is the fact that HP didn’t even try to compete with Cisco for the IP PBX market, at least not in any appreciable way. Cisco may be the 800-pound gorilla in the room of enterprise-class digital telephony but HP has never really shied away from throwing down with the industry giant in the past. In fact HP seems to love competing with Cisco and relishes its position as one of the larger company’s top opponents.

So how come HP decided to sit this battle out?

HP represents Cisco’s most significant combatant. But HP isn’t the only company that likes to butt heads with Cisco. In the world of IP PBX Cisco has quite a few competitors, including heavy hitters like Microsoft, ShoreTel and Avaya.

Microsoft. ShoreTel. Avaya. Besides the fact they’re all trying to cause a ruckus in the IP PBX market these three companies have something pretty important in common- they all work in partnership with HP. If HP decided to pump money into its digital telephony division, hell if HP decided to actually create a viable digital telephony division, it would most likely wipe the floor with each of these companies.

In the short term HP would profit from snagging a large corner of the IP PBX field by eliminating these competitors and stealing their market share, but in the long term the company would suffer severely if it cut ties with these crucial partners.

What Does This Say About the Digital Telephony Market in General?

It’s a little tough to tell. We anticipate the digital telephony market is going to be incredibly exciting to watch over the next 5-10 years and will be filled with plenty of surprising developments. 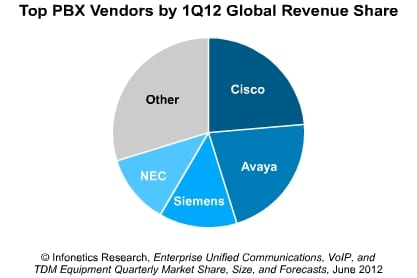 But the fact that a company as large as HP is willing to pass up having a presence in the enterprise-level digital telephony market is confusing. That market is already lucrative and will only continue to expand over the next couple of years. There are some really big profits to be made, and it’s curious that HP wouldn’t be able to work out an amicable arrangement with its partners to allow its own product on the market.

HP’s dropping out of IP PBX may point to the fact the enterprise-level large premise-based phone systems (or Unified Communications Systems) are feeling pressure from the Hosted PBX sector of the telephony market which is maturing faster than anyone expected. It may be too early to say but premise-based enterprise PBX market will eventually enter the last stage of its development, with a few companies such as Cisco Systems controlling most of its profits as smaller competitors begin to drop off, get swallowed up, or opt out of entering the market entirely. While HP, probably, would not have been able to stand toe-to-toe with Cisco the company still had the opportunity to sell a really great product and to diversify the market in a manner beneficial to customers.

Yet by letting their digital telephony acquisition wither on the vine HP passed on this opportunity. Might the company believe that the digital telephony market has already entered an intractable monopolistic structure?