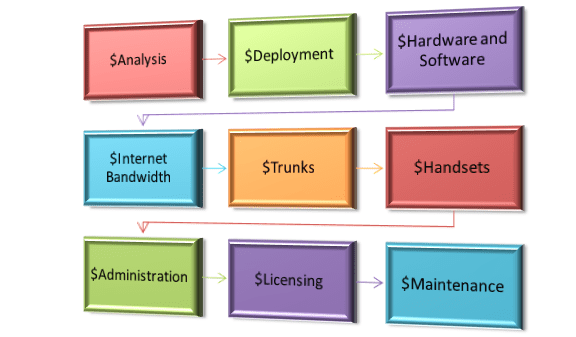 Cost is a major factor that drives virtually every decision a business owner makes. Not only is it important to look at the up-front costs of something, the total cost of ownership comes into play, too. For some companies, it might be worthwhile to lay out more capital in the short-term, if it parlays into long-term savings. For others, they might not use a product or service long enough to justify the initial set up costs. This is true of a hosted phone system, just like it is for anything else.

It may sound strange to talk about the total cost of ownership with an off-site phone system, since the user doesn’t actually “own” anything other than handsets. In reality, that’s what makes the TCO for a hosted phone system lower, in general, than for an on-site system- there’s no equipment to own. That doesn’t always make a hosted phone system less expensive in every case, but it almost certainly will be as soon as your business requirements grow beyond 3-4 extensions and a single location.

A lot of small and medium-sized businesses are turned off to owning their own system, because the initial cost of the equipment they need to do so can be pretty high. That’s just the tip of the iceberg, however – a lot of businesses look at that as a one-time cost, when it’s really anything but. Technology ages very rapidly, which means that it’s virtually guaranteed that a company’s phone system will require an overhaul at some point, and all of that equipment will have to be upgraded or replaced. This is not an issue with a hosted phone system, since the responsibility of keeping equipment and software up-to-date falls on the hosted PBX service provider, not the user.

That said, it’s tempting to look at an initial set up cost of several thousand dollars for an on-site phone system versus a low monthly fee for a hosted one, and decide the hosted one is cheaper. The trouble is, that’s not always the case. For some companies, that low monthly fee is going to be much higher than what they would pay to maintain their own system, which will eat into their savings. PBX vendors are likely to charge users hefty licensing fees for each software upgrade, each additional seat, increased capacity or new feature. This will vary based on the actual system in question, but unless business requirements are set in stone for years, this change is likely to occur and repeat sooner than anticipated by many buyers.

Figuring out the TCO for any phone system is requires good understanding of your cost structure.

In most cases, a hosted phone system will be worth it for the sake of convenience and peace of mind alone.