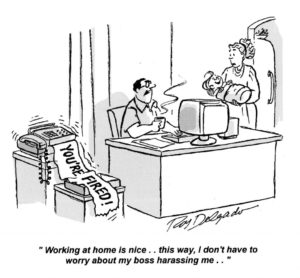 The only response Yahoo! released regarding their work-from-home ban illuminates an important facet of the debate. After reaffirming the company’s commitment to not “discussing internal matters,” Yahoo!’s PR reps stated:

“This isn’t a broad industry view on working from home- this is about what is right for Yahoo!, right now.”

“For what it’s worth, I support the no working from home rule. There’s a ton of abuse of that at Yahoo. Something specific to the company… people slacking off like crazy, not being available, spending a lot of time on non-Yahoo projects…

It was a great way to get Y! to pay you while you put in minimal work and do your side startup.”

Other internal sources have come out and stated most of the company’s remote workers “weren’t productive,” that “A lot of people hid. There were all these [remote] employees and nobody knew they were still at Yahoo.”

Overall, even though some sources reported Yahoo!’s remote work force is a small contingent of customer service reps, most reports indicate Yahoo! has a very, very large remote workforce, and these remote workers came from every department. In fact, many sources are reporting, or at the least speculating, Yahoo! is using this move to cut the fat from its swollen ranks of employees in order to lean down to only those most productive and committed team members.

As far as layoff strategies go this isn’t a terrible idea, but it points to serious problems within the company at large, problems that are both particular to its remote work force while spanning well beyond the fact many of its employees have previously been able to work from home, even if for just 1 or 2 days a week.

In fact, both supporters and detractors of Yahoo!’s decision seem to agree the company’s main problem was an incompetent implementation of its work-from-home policies. Numerous problems are cited with Yahoo!’s implementation, most of which surround a general lack of oversight and overall poor management. From all accounts, and the shocking statement the company was paying remote employees no one even knew were still on the payroll, Yahoo! did a terrible job managing these employees, and it’s impossible to expect cost-effective performance from employees with no responsibilities, and from managers who aren’t accountable to anyone.

When it comes down to it remote work arrangements don’t have to open a company up to abuse from its employees. There are plenty of solutions available if a manager wants to monitor remote employee performance and ensure their productivity. In fact, as Virgin’s figurehead Richard Branson responded to Yahoo!’s decision:

“If you provide the right technology to keep in touch, maintain regular communication, and get the right balance between remote and office working, people will be motivated to work responsibly, quickly and with high quality.”

Plenty of other companies agree with this statement, not just in principle but in practice, as remote-work arrangements are the norm among Silicon Valley giants, and none of those companies seem to encounter the problems found within Yahoo!’s policy, making it clear the problem here has nothing to do with remote work arrangements themselves and everything to do with the way Yahoo! implemented and looked over their policy and their remote employees, making Yahoo! more of a cautionary tale than a true damning on the policy itself.