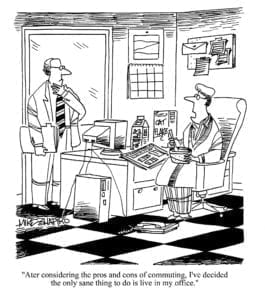 Over the last couples weeks a single piece of news has hit the tech world hard and been the focus of spirited debate, with different publications, bloggers and popular writers taking both sides of the discussion.

In late February Yahoo! decided to effectively ban work-from-home opportunities for their employees. While it’s unlikely any other company is going to follow Yahoo!’s lead and put a stop to their own work-from-home opportunities, the ban itself and the debate it’s inspired has brought to light many of the Pros and Cons of remote work arrangements, which may influence the way you choose to implement these arrangements in your own workplace, and which may convince you these arrangements aren’t right for your organization either.

Yahoo – Not Exactly Playing at the Top of Its Game

One of the most significant elements of this controversy lies in the fact it was Yahoo! that decided to implement the ban, not Google, not Facebook, nor any of the other tech giants currently doing gang-busters business as they reshape the way the internet works. No, it was Yahoo!, a company that hasn’t blazed a significant digital trail in recent memory.

The hard truth is- Yahoo! is currently floundering, it’s currently looking for a way to rediscover its voice and it’s trying to figure out how to be able to match its Silicon Valley competition, composed of the aforementioned giants as well as aggressive start-ups, in order to remain a relevant and powerful force in coming years.

Why does this matter when it comes to evaluating their decision to ban work-from-home arrangements? Simple. If Google or some other incredibly successful company decided to put this ban in place the decision would smack of confidence, or some sort of legitimate knowledge about what’s good and what’s bad as far as employee management goes, or even as a bold choice from a new company trying to reshape the rules of modern business. In these cases the decision would come off as measured, as well-reasoned, and as the idea of a powerful or promising company sharpening its blade in order to produce even better work for its customers and increased returns for its shareholders.

In other words- if Google decided to eliminate work-from-home arrangements the decision would seem like it came from a position of strength. And while the decision would still come under some fire, the tone of the conversation would be different, and more people would assume the megalithic company knew something the rest of us hadn’t figured out yet or, at the least, was working from sound data (more on data in a minute).

Yahoo is No Google

These days Yahoo! is no Google, and their decision looks like it’s coming from a position of weakness, maybe even a position of desperation, a point that isn’t helped by the fact Yahoo! has declined to comment on the decision in any meaningful way, instead telling the press the equivalent of “Mind your own business.”

Yahoo! desperately needs to innovate and compete with its rivals in a meaningful way, and according to the internal memo declaring the end of work-from-home arrangements its clear the company sees this decision as a step towards creating the sort of collaborative environment they need to construct if they’re going to become a real web presence once more.

But Yahoo! isn’t going to be able to reclaim a top position in Silicon Valley unless it can attract top talent, and top tech talent these days expect to have some sort of flexibility when it comes to when and where they work. If nothing else, how many Silicon Valley wunderkinds are going to want to work for a company that gives out increasingly-standard benefits and then takes them away just as quickly, without internal discussion, without warning, and with a truly iron-fisted, totalitarian mentality?