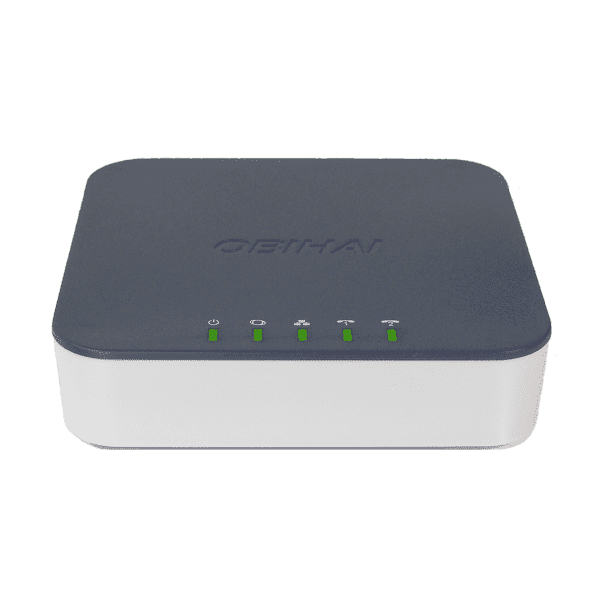 The OBi202 has 2-phone ports. It supports up to 4-VoIP services such as a multitude of SIP-based VoIP services plus OBiTALK calling. With the OBi202, you have the power make and receive phone calls simultaneously from each phone port using ANY available service configured on the OBi202. The OBi202 also supports T.38 fax for reliable fax calls over the Internet as well as a 1-port router with VoIP application prioritization (QoS). The OBi202 also features a USB port for use with OBiWiFi and OBiBT.

Based on comments from Obihai customers, there have never before been VoIP devices that can be set-up so easily and used immediately, with absolutely no prior technical knowledge of VoIP or voice & data networking by the end-user.  The OBi202 is no different than its brothers, the well-reviewed and market-leading OBi100 and OBi110 VoIP phone adapters.  When used in conjunction with the www.OBiTALK.com web portal, anyone can have an OBi up-and-running – making and receiving calls in minutes.

Phones connected to the OBi202’s 2-phone ports are able to access any of up-to-four (4) SIP or Google Voice services and the OBiTALK OBi-to-OBi calling network to make and receive free and low-cost calls from across town or to anywhere in the world.

While the OBi202 phone ports can function independently with any of the available VoIP service providers and OBiTALK, the OBi202 also offers collaborative features which allow its phone ports to work together as a mini-phone system.

Service providers Vonage, MagicJack, Nettalk, Ooma and Skype (via FREETALK) do not currently support anything other than their own device, locked-down to only their service. Obihai devices, on the other hand, can be used with a multitude of services – actually four at the same time.  The OBi202 can be used with any Internet phone service that supports the SIP open standard.  For example, the OBi202 may be used with hundreds of Bring-Your-Own-Device service providers like; Anveo, Callcentric, VoicePulse, VoIP.ms.   By using the www.OBiTALK.com web portal, customers can easily set-up the OBi202 with their BYOD service username and password. The OBi202 also supports the T.38 real time fax-over-IP standard protocol for reliable faxing over the Internet.

From the telephones connected to the OBi202, anyone can make free calls in the USA and Canada at least through the end of the year*.  Users may also receive calls to their Google Voice phone number(s) and get new / unheard voice message notifications on the phones attached to the OBi202.  If outside the USA or Canada, users may still use their Gmail account with the OBi202 to place calls to over 150 destinations worldwide at incredibly low rates – For example; USA and Canada for 1₵ per minute, India, China and Hong Kong for 2¢ per minute. Up to four (4) Google Voice accounts may be configured on the OBi202.

The OBi202 is designed on-top of a powerful purpose-built processing platform.  The OBi202 is equipped with a one-port Fast Ethernet router with firewall and integrated quality of service (QoS) that ensures voice conversations are prioritized on the network, before all other traffic.

The OBi202 USB port is designed to serve multiple purposes. Using the OBiWiFi Wireless Adapter, the OBi202 can be placed anywhere within range of an 802.11b/g/n access point.  Or, the USB2.0 port can be connected to a storage device to enable local and remote access of digital files via the Internet by authorized users.

The OBi202 includes the ability to be managed by the OBiTALK cloud configuration service. From anyplace where there is an Internet connection, OBiTALK allows users to add OBi devices, configure VoIP accounts and share services amongst their own OBi endpoints and those of their trusted friends. In-service software updates are easily performed either automatically from the OBiTALK portal or by dialing ***6 from a phone attached to the OBi device.

With Obihai Zero-Touch provisioning (ZT), it is very easy for service providers to purchase OBi units in quantity and realize the benefits of touch-less provisioning to lower operational costs and speed-up customer deployments.  OBi units provisioned via ZT can be fully customized such that the OBi factory default settings are those of the service provider and securely locked to the OBi device after initial power-up and ZT provisioning.  Subsequent subscriber-targeted profile configurations can be directly served from the service provider’s network with security and reliability.